Some swimmers have events they wish to do for varying reasons, this was not a swim on my list.

This was a swim on Swimstory Sam’s list (while Vermont was all my pushing) After he came to swimming as an adult swimmer, he had done a relay around the island and it stayed with him to do as a solo. After a while he convinced me, it would be a new longest distance swim but the idea of swimming in a salt water stew was a challenging one for me with my normal OW swims being rarely above 70f.

Anyway the first 6 months of 2016 went well and my mileage was well placed for this swim.

Due to the location, this swim required some planning. Sam his kayaker Kevin and the yacker procured for me (Logan) drove down from Tennessee and Atlanta respectively. I flew into Miami and was procured at the airport. We then proceeded to drive to key west. Though we made a stop for Kevin to get his Cuban coffee. He gave me a thimble (non coffee drinker) which sent me into talking nonsense for an hour. We arrived at the hotel where us 4 grown ass men would be sharing a room for the next 3 nights.

On the Friday we rented some double kayaks to check out the water and some of the locations. We decided to focus our efforts in the channel due to the challenges we heard it presented with the currents and changing water depths. The water was really warm and got real shallow in some spots, we also got ourselves into a channel of water as the tide was coming in and got ourselves stuck in one spot no matter how hard we swam. Lessons learnt for the next day.

We then proceeded to the check in at the community college which was a little disorganized but we did pick up some tips about eddys etc. That night we got to do some firsts, such as meeting Chris and Jia. Chris is a marathon swimmer I have known for a while but only through the internet. Jia was a friend of Chris who is an awesome swimmer herself and gives a lot back to the swim community in volunteering. We also discovered Jia had been stung by a jelly while testing out the water. It looked pretty nasty, I took a picture which I won’t post but she carried on like a trooper. We all had our pasta dinner and headed off to our hotels for sleeping.

Next morning was go time. I did not get more than 2-3 hours sleep for varying reasons but felt good. I got up and started slathering on the sol Rx (long lasting sun screen), knowing the temps and the need to slather I had shaved down for this swim and resembled a seal all oiled up. We made our way to the beach, I added some zinc oxide then touched my goggles and got cream all inside them (lesson learnt for future).

Race started, water was high 80s, water was also crystal clear and we got to see lots of wildlife including a nurse shark around mile 1. Interestingly I started this event really well, after first 4 miles I was ahead of where I expected to be, but as we passed the naval yard we turned the corner and I got hit by a wave of warm water. I let out a shout and Logan thought a jelly had got me. But no it was just the damn hot water. From there I slowed down and it was a question of perseverance. Logan came up with the good idea of dumping the melting ice from the feed cooler over my head and at our feed points. Though at a scheduled feed going through the channel from Friday he suggested we keep going for a few more mins as something large had caught his eye a few mins earlier. No questions asked and we kept going.

The final straight of any swim sucks, you can see the end but it never seems to get closer. During this swim I had one of my less glamorous moments and shouted at Logan, for which I later apologized, but he was pulling too far ahead of me and I was having to lift my head to see where we were going versus seeing the kayak to my right every time I breath. Also while we know the hackers know best, we are sometimes water logged idiots who think we know best, so I regularly questioned during that last straight if we were going the right way and why where we so far out from the beach to our right. But the yacker always has the better view and knows best.

We finally reached the end point, we could see the buoy which I swam to and gave it a good punch. I thanked Logan and proceeded to get out of the water. Chris had finished and another friend from the internet Doug had finished in the leading pack with Chris. Poor Jia had to be pulled and taken to the hospital due to her sting. Swimstory Sam came in a few mins behind me. The swim was under 6 hours, but it was a new distance and long time swim.

I did pay the consequences for this swim though, it drained me physically and mentally, my swims over the remaineder of the summer were few and far between. I had to make a real effort in Sept to prepare for the 2nd marathon swim of 2016 but that’s for another post. I did get some learnings though about perseverance, being out of my comfort zone and swimming in warm water. 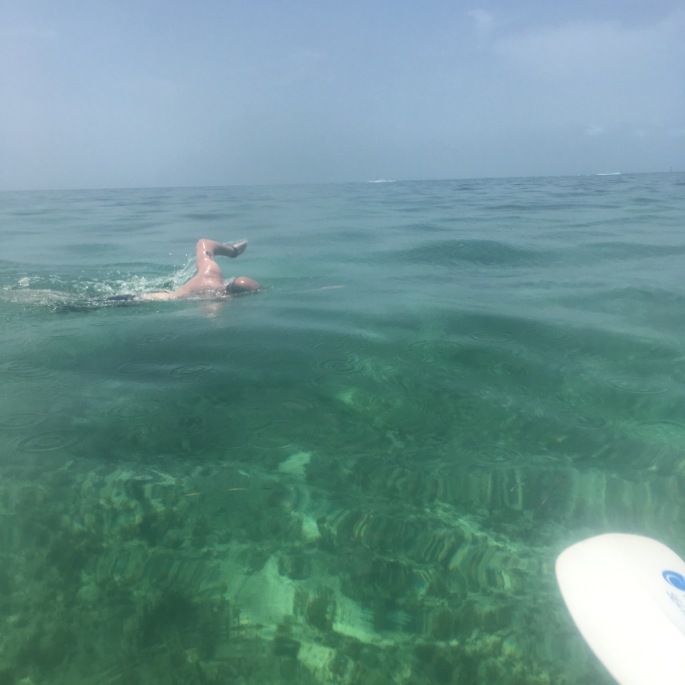