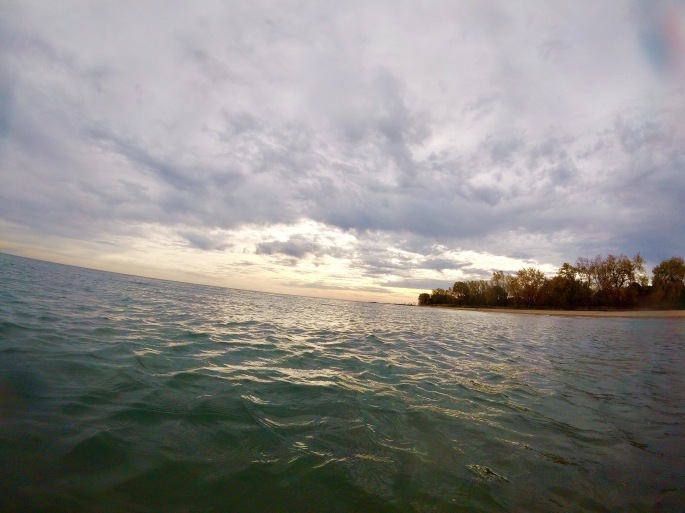 I honestly thought that my season was over last week. But then this week, I got a pleasant mail from a swimmer I really respect. She said she was planning on a 6hr qualifying swim for the North Channel. She was sending out this mail to a few competent swimmers she knows. She then separately sent me another mail, encouraging me to join her.

We had some back and forth, I had some concerns in that,  Lake Michigan was unusually warm for most of the summer staying at a pretty consistent high 60s or low 70s. So I felt like I did not have enough cold water swimming this year,  my second concern linked to this in that I did not want to jeopardize the qualifying swim.

Anyway the swimmer in question was very encouraging and like some other swim friends seems to have more faith in my abilities that I do. In the end I agreed, she suggested I aim for 2 hours, I suggested 10 mins.   This also nicely fell in to the category of being able to give something back by working as a support swimmer by providing some company.

She advised that there would be some people on the beach with feeds including hot feeds which I had never done before.

So Saturday morning came, we agreed to be in the water by 8.45am. I got there about 8.25, the swimmer got there around same time. We spoke for a few mins including with another swimmer who planned to try for an hour.

We got in the water at 8.43am, myself and the other swimmer held back chatting and accilimatizing. Initially the water was 56f and left me with a little shiver, we decided we should start swimming to get past this. We headed towards the swimmer to catch up, we shared a few words as she passed us by and turned to follow. I did my best to keep up while the other swimmer fell back.

We did a couple of laps, approached the hour mark, by this time the other swimmer was exiting but was kind enough to ask what feed we wanted and brought us some items. We then did another lap and another feed and this continued.

As we approached the 2nd hour the swimmer pointed out I could just keep going and get a channel qualifier done myself. I laughed at this suggestion as it really was not on my mind today. But with that said I was feeling comfortable, other than I failed to put Vaseline on my chafe points with the expectation I would not be in long.

At this point, we decided to swim North for a while to check the water temp that direction. It varied from 56f to 58f. I don’t think I have ever gone looking for colder water in Lake Michigan before so that was new. We did a couple of laps to the north and we were then approaching the 3 hour mark, so I advised I would do one more lap. By the time we finished this lap I was at 3hrs 11 mins. I have never exceeded 90 mins before at sub 60f so this was a nice surprise. Though I should add I did not get out due to the water temp.

To be honest I am not really entirely sure why I got out. I know that at this point I don’t really have any channel swims in mind, maybe this was psychological in that I did not want to create another potential swim to consider or add another question people ask me. What I did learn is that I could of done a channel qualifier today, I don’t have any doubt I could have successfully finished. This is also a new discovery which I think has been aided by the swim season I have had this year. It also creates some confidence that if I decide at a future point to go down this route, it is completely possible.

A few hours later I did get a message from the swimmer that she completed and also some encouraging words on my strong swim and that I seem to be getting a sense of how good I can be at this swim stuff. It was a really nice compliment and coming from this swimmer was something that really added to what has been a really enjoyable season.