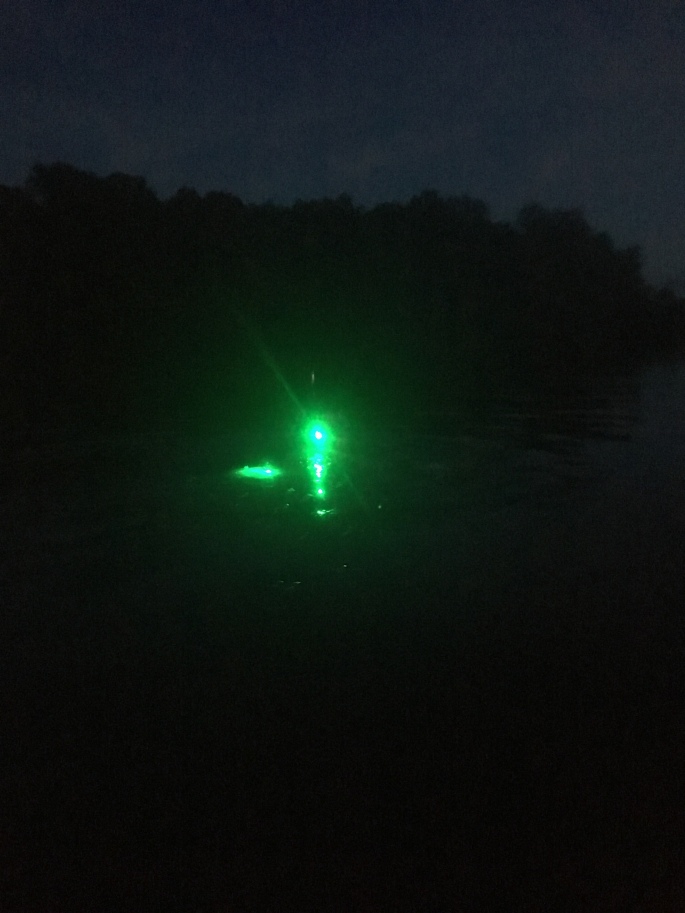 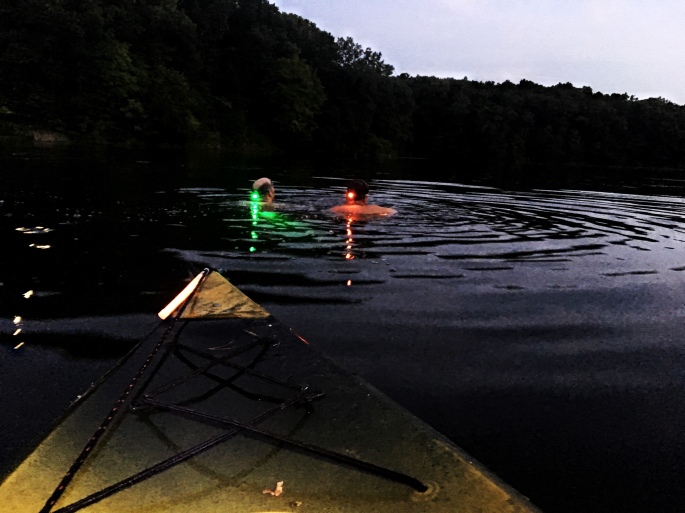 As I wrote the heading I will be honest, the metaphor kind of struck me more than this past weekends swim in the dark.

This swim figuratively and literally is a swim in the dark with the hope of ending up in the light of a new day all happy and shiny.

All past swims I have done, have been organized by others, I just turn up and swim. This one, I am organizing, I am a little terrified something will go wrong but all the swimmers know what they are doing, they are all experienced at distance swimming but still.

This set up and my planning and working with others on it, has been like swimming in to the dark, I am learning things and new considerations daily. Let’s hope it ends up as fun and worthwhile as last weekends night swim.

Getting back to the original point of the post, swimming in the dark. I don’t have a lot of night swimming experience but as with many things in my approach I was ready to wing it, I had even discussed with my kayaker James and he agreed it wouldn’t be the first time we had winged something, each swim we do something new comes up and we learn. However, my wife, had concerns she wanted us to practice and I respect that, she has never not asked me to do one of my swims, she has been supportive and never said I don’t want you doing this, so when she voiced concerns it is only appropriate I take them seriously.

So James and I travelled to a friend (also doing the solo swim) who lives in southern Illinois and he has access to a lake. So we drove 4 hours for a swim.

We got in just before dusk having decorated the kayaks with glow sticks, with James wearing a head light and me wearing a light on my goggles and togs while Tom just had a light on his goggles. I was wearing green and Tom red. It was still pretty light when we got in but darkness was coming in. As ever New lake for the season so I peed (I think the river and lake gods like it) and we swam a few hundred meters to see how goggles and lights held up. James took some photos and videos for me to see the perspective later.

Tom needs at least two lights not just one but preferably 3.

I generally breath to one side which is also the side I ask kayaker to stay on, so that I can see him with each breath. However we discovered with my rolling to breath, he loses all visibility of me as both lights now point away from him.

We moved my lights on shorts to my hip which resolved the issue, but we agreed to add more lights, so one on each hip and center of shorts (I am going to look like a Christmas tree)

Glow sticks worked well on kayak, with one at each end so I know where the front and back are, plus two in middle.

The headlight may need to not be on outside of feeds as it’s annoying for James as the light catches the paddles during each stroke.

Investigating a light attachment that we can add to the kayak. That can be also used as a spot light.

From my visuals I suggested adding glow sticks to the kayaker PFD (personal flotation device) so they stand out a little more for me.

Being Lake Michigan we decided each kayak should have a Bilge and float in case of any accidental over boards or water on lakes.

After the logistics of lights and now that it was dark, we played around in the water. Interestingly with the lights on me, I would argue my personal visibility in the dark of my hands etc. was actually better than during the entirely day time EndWet Swim.

Then we swam another roughly 1km, playing in the darkness, diving to see at what depth James could see my lights etc. and making sure no need to freak out in the water in the darkness.

So all in all, this was really useful, we learnt some stuff, we identified enhancements to our safety and mentally came away feeling more prepared for a night swim. Hence a thank you to my wife for not letting me wing it. Then we drove 4 hours home.

Now to figure out logistics of getting to start and end points with kayaks, swimmers etc.