So yesterday’s 10km Swim to the Moon ” marathon swim” was not a great event for me, it was probably the worst I have felt during any marathon swim, in fact any swim race I have done. I had hoped for better, yesterday was to be my 10th marathon distance swim since 2015 and my 25+ open water event since returning to swimming in 2013. There were multiple factors for this, some silly personal mistakes, some environmental issues, some physical issues and some organizational issues, but here is the thing even with all these annoyances, the actual swimming, the 10km of rotating my arms I really fucking enjoyed.

What is the one thing all swimmers know, all people who do a sport for that matter….don’t change your tools on the day of an event. Well I know this too and what did I do, yup I changed my goggles. I had never worn them (though are a brand and style I have been using for years. I spoke about it with my wife and mother in law at dinner on Friday, I said I knew it was a bad idea. I spoke about it on sat with other swimmers, I said I knew it was a bad idea. I wore them on Sunday. As I took the first dive in to the water at the start, they moved, I got water in them. I decided I didn’t want to look like a dick stopping to fix my goggles already and swam a few hundred meters with some water in the lenses. After about 30 mins I was getting a headache, my goggles were too tight, I decided to ignore and persevere, around my eye started to hurt, I finally stopped after over 2 miles to loosen them, my headache went away pretty quickly. I don’t know if this was self sabotage but it was a mistake.

Last week in work was the culmination of 3 months of planning for me with the taking place of the Global finance and accounting conference in Chicago, as the international financial controller I was responsible for a lot of it, from agenda, to nights out and presentations, I had finance team members from all our locations visiting. I was out mon to wed night (not a typical week) and when it all finally finished without any issues, I was tired. On sat I drove the 4+ hours to Michigan in the afternoon, had dinner, smoked a cigar, went to bed around 11 and got about 4.5 hours sleep. I was tired going in to the event. In line with this my arms were hurting from about a mile in, this should not happen and I can only blame tiredness and the next paragraph

I got my food wrong, on sun morning I had a cliff bar at about 530, I drank a bottle of water, I tried drinking some of my bottle of tailwind, it wasn’t sitting right so I stopped. I didn’t eat my 2nd cliff bar, I didn’t send my other bottle of tailwind to the half way point. Thankfully I did stick a pack of GU chewables down my shorts. I was dehydrated from early on, I chose not to stop at the feed points on the course and by the time I hit half way, I was struggling, I took 4 mins at the half way feed, I drank 6-8 cups of water and Gatorade and ate my chewables. 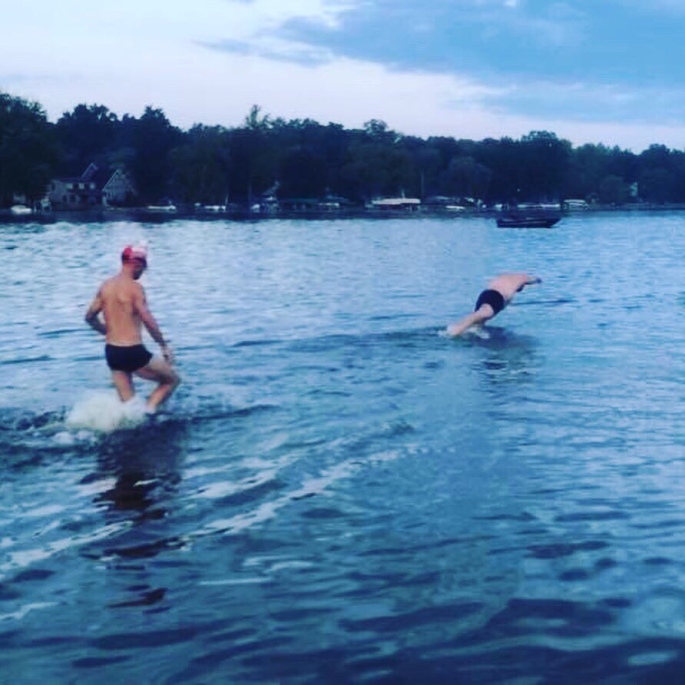 I don’t like warn water, this water felt warm from the first stroke. Last I heard on sat it was 78f, my guess is there were plenty of spots in the 80s and it drained me. I should of taken my hat off but in another silly mistake, i did not put sunscreen on, I said it’s 7am, I will be done by 10am, it I’ll be fine. It was a mistake and I know better and my bald head had it been covered with sunscreen would of been fine without a hat.

This event allows those who wish to, swim with a safety buoy, not many in the 10km did but they start the 5km swimmers at the other end and as I got in to that section of the course, we had a bunch of swimmers swimming towards us, including with buoys that matched the colors of the course buoys. This led to multiple situations of having to stop to figure out where I was going, this was not ideal and many around me had the same issue.

As is in line with USMS rules, the swim allows for swimmers to rest on kayaks or SUP’s as long as they don’t make forward progress. I was swimming along, last I looked no one in my sight and then bang I hit a kayak with a swimmer attached as they were floating side direction along the course I.e. no forward movement but sideways, it hurt. I lost some time shouting and then re orientating. 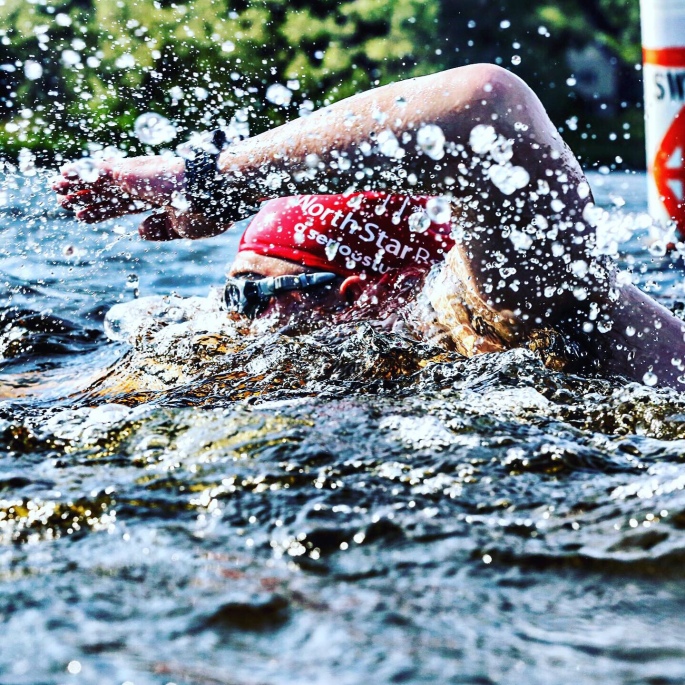 I hurt yesterday, in fact I hurt today, this should not be the case from a 10km and has not been the case in the multiple 10km training swims I have done this year. Some I put down to tiredness, some to dehydration and some I just don’t know and it has me a bit worried. But I am going to try to avoid getting myself in to a self fulfilling prophecy on this without more swim data.

So the reality is I made lots of mistakes yesterday, I could try to blame more environmental issues but reality is I can only control me and I did a real bad job of that yesterday.

I completed my 10th marathon swim from 10 marathon swim starts, yes I struggled, but I persevered and I hope that stands to me in the future. I also got to see a lot of people I like and enjoy that element of the swim which is an important factor and one I forgot a little this year when trying to plan my aborted event.

So I said a paradox, well yes, for all the shit above and my annoyance and frustration at my performance, I really enjoyed the swimming of a 10km, all the issues did not take away from my actual enjoyment of the swimming, now I just need to make the swimming and all the other factors align again